Top 10 Reasons Why App Development Fails to Create an App 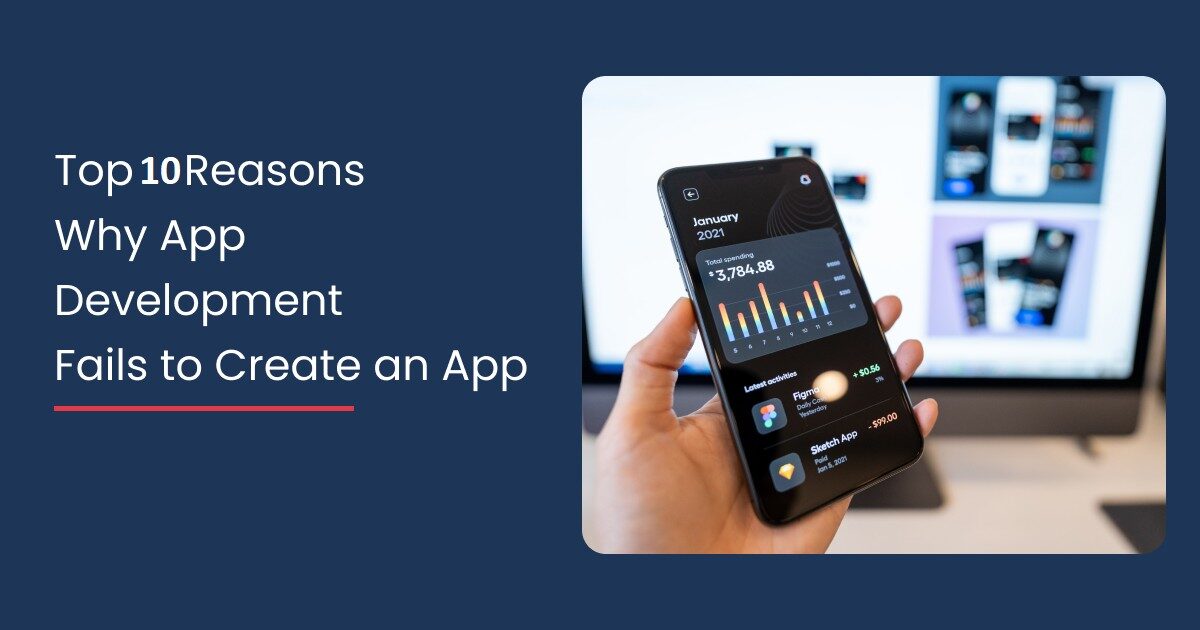 After spending time and money on finding the right app development company, you would expect that your project would be in good hands and any difficulties would be resolved promptly. Unfortunately, this isn’t always the case; sometimes things just go wrong from the start and your app never gets made. The reasons why app development fails are many and varied, but below are five of the most common ones. There is multiple

App development can be quite challenging and difficult to get right the first time around, especially with so many apps in the world already. If you’re an app developer looking to create your own app, you should know why app developers fail, learn from their mistakes, and make sure that your app doesn’t end up on the cutting room floor or in the App Store reject pile. This list will show you why app developers fail by highlighting ten of the most common reasons why developers have failed before you even got started. Read Learn How to create an app

Building an app is more than writing some code and building a graphic user interface (GUI). You also need to study your intended market, develop a marketing plan, build a budget and determine how you’ll measure success. If you don’t take these steps into account before you begin to build your app, it will likely fail. In today’s crowded marketplace, no app stands out from its competitors without some prior planning. And if you aren’t willing to do what it takes to make your app stand out, then perhaps you should reconsider whether or not you should even attempt creating one in the first place.

2) They Don’t Study the Market

No matter how good you are as a programmer, if you don’t understand your market or your potential customers, you won’t make money. Before writing a single line of code or even thinking about who should build and distribute your app, take some time to research who might use it and why. This will save you lots of effort later on. For example, building an app for kids may seem like a great idea until you realize that they typically can’t afford in-app purchases. You also need to look at what other apps already exist in your niche. Look at competitors and see what they do well and where they fall short—and try not to follow their lead blindly. If there are 20 popular weather apps out there but yours is different because it offers snowfall reports, then focus on those strengths instead of trying to be like everyone else by offering current conditions, radar maps, forecasts, etc. Be unique!

3) They Don’t Have Well-Defined Goals

You’re sitting at your desk, staring out into space. You don’t know what to do with yourself. In your mind, you have a great idea for an app, but it hasn’t fully fleshed itself out yet. Maybe it never will. The key is to take action, even if it’s not quite clear where you should be headed just yet. As Chip and Dan Heath write in their book Made to Stick: Why Some Ideas Survive and Others Die, the difference between an interesting observation and a usable concept is direction. Define why you want to create an app, who your target audience is and how you expect to monetize.

4) They Don’t Consider Their Target Market

If you don’t know who you are making your app for, there is no way it will succeed. Before thinking about how to design an app, you should be extremely clear on what problem it will solve and who that target audience is. An app might seem like a simple thing to create but in reality, each new idea takes time and planning so that it aligns with your long-term goals and vision of your company. If you skip out on doing all of these steps, then you can expect to see lower sales and fewer downloads than necessary.

They thought they would enjoy app development, but they did not have enough passion to follow through. This can be related to lack of experience with technical and creative skills required for developing an app. It is highly recommended that if you are lacking in these areas, a lot of patience is necessary to learn how it is done. A person can learn anything with sufficient motivation and dedication! Remember: Rome wasn’t built in a day!

6) They Allow It to Become Only a Side Project

In many cases, an app is something that’s secondary to your main job, something you want to do in your spare time. It’s easy to see how you could allow other aspects of your life to overtake a side project like an app. You might let it become something that only gets attention every so often and forgo setting regular goals and schedules for yourself because it becomes more of a hobby. But if you have a great idea for an app and are able to work on it full-time, by all means – do so! Don’t waste an opportunity like that. A lack of commitment will quickly lead to discouragement when sales don’t meet expectations or deadlines aren’t met as quickly as they should be.

7) They Lose Interest in Time

Entrepreneurs have trouble getting things done. It’s a fact that you have to deal with, but it can make your life very difficult. One of many reasons that app developers lose interest is because they lose interest in time. They get into a project and set specific times for themselves to work on it, only to find themselves doing something else instead of working on their app idea. Being an entrepreneur takes enormous amounts of self-discipline; if you find yourself spending all your time working on other projects and not sticking to what you’ve told yourself you’re going to do, consider hiring someone who will be able to focus on developing your app without running out of steam or losing interest over time.

8) They Run Out of Money

Financing your app may be difficult, particularly if you’re a first-time entrepreneur. If your app idea is decent, some businesses may invest in it. You can pitch an idea to angel investors or other funding sources, or ask friends and family for a small investment (be careful here). Regardless of how you get money for your app development project, keep in mind that hiring an independent developer is going to cost more than you think—even if he’s charging less than $10 per hour. Many businesses underestimate how long developing an app will take and find themselves short on cash before they realize their project is ready for market testing. Save yourself from crashing and burning by planning better and staying realistic about what your costs will be.

Inevitably, you’ll have to tell your customers that you need more time and money. Whether it is a client paying for your services or Kickstarter backers who pre-ordered your app before it was built, don’t be afraid to give them updates about what is happening. Even if all you can report is that things are moving forward as planned, people will appreciate knowing they aren’t being forgotten. And don’t worry; if you are doing an honest job communicating, everyone will forgive delays and budget overruns. Remember: You are delivering something of value—it just takes longer than anyone hoped! If everything goes according to plan, even better than expected—your investors (if any) will love that!

10) Customers are Frustrated with Lack of Progress

Whenever a project stalls or stops moving forward, customers will inevitably get frustrated. If you have a software development team in place that’s supposed to be creating an app for your company but nothing is happening, you have every right to be angry and frustrated because time is money. It’s important that if you’re paying someone to create an app for your business, they complete it on time and follow through with their end of the deal; otherwise, it can cost your company quite a bit of money. But there are many reasons why software developers might not finish projects (which is what we’ll go over next).